There are a bazillion ways your Christmas decor can go. Traditional, color scheme, industrial, metallic, glam, themed every which way. This year I decided to embrace my life now. 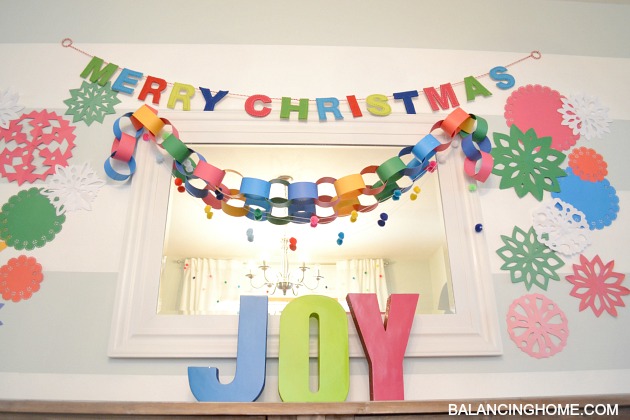 I have a 5 year old, a 2 year old and a 7 month old. For Christmas I pictured something out of the Holiday. You know–the part where Cameron Diaz snuggles up with Jude Law’s kids in that snowflake fort? So that mixed with the fun that is Land of Nod. Then I was talking to my friend Ann Marie from White House, Black Shutters and she said she was going for Kindergarten Chic and I was like YES! She basically coined the term that embodied every thought that was running through my head.

You know that moment where you get an idea and that idea quickly becomes an obsession, because nobody else in the world seems to get your idea? It is like the time I decided I needed a red bangle for my bridal shower. I had a black and white dress and red shoes and I just wanted a red bangle. I would have settled for a red anything! Necklace, earrings…something. I went to every store under the sun and none. I kid you not–the day after my bridal shower there were red bangles EVERYWHERE! That is how these things go. Well my Christmas plan was going something like that. I wanted an alphabet tree, but couldn’t find all the letters in the right size for the right price. I gave up on that idea–I let it go. Then I was looking for colorful ornaments, but couldn’t find the right mix.

Ross calls me after I have been gone for hours all, “where are you?”

And I told him, “You know how I just told you nobody gets me and I’m never going to find the right stuff for my Christmas plan? While Target gets me!”

And then Ross probably died a little bit inside, because we all know how dangerous Target is on any given day, but to a woman on a mission–uh oh! 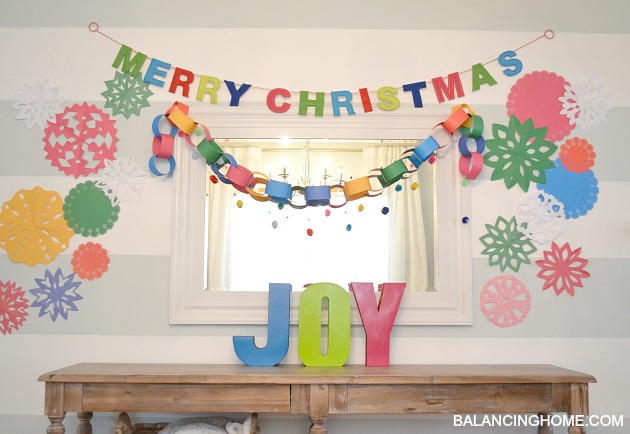 This was the most fun I have had decorating for Christmas–EVER! The kids are so excited and Eleanor is just loving the decorations. Since she just turned 2 1/2 this is the first Christmas where she actually kind of gets it. We made the paper rings as a family. Ross did the cutting, Eleanor picked out the colors, Quinn threaded the paper through and made a circle and I stapled it.

Ross may or may not have tried to school the children on the Industrial Revolution and the assembly line.

I worked really hard at letting go of my controlling ways and whatever color Eleanor picked, we rocked. It turns out, the best way to get kindergarten chic is to let the little ones run the show.

I’m sad to say that I cut the snow flakes after the kiddos went to bed. I’m thinking I might be able to teach Quinn. He might not be ready for the folding part, but I think he could do the cutting.

Oh, and the pom pom garland was a team effort. We dumped out all the little puff balls on the table and the kids took turns bringing me the next color to go on the string. If a needle wasn’t involved I would have let them make their own.

The J-O-Y and the Merry Christmas bunting are from Target. (on sale this week too!)

Honestly, I was dragging my feet about decorating this year. I just wasn’t feeling it! But once we picked out our tree and got it up, everything just fell into place. 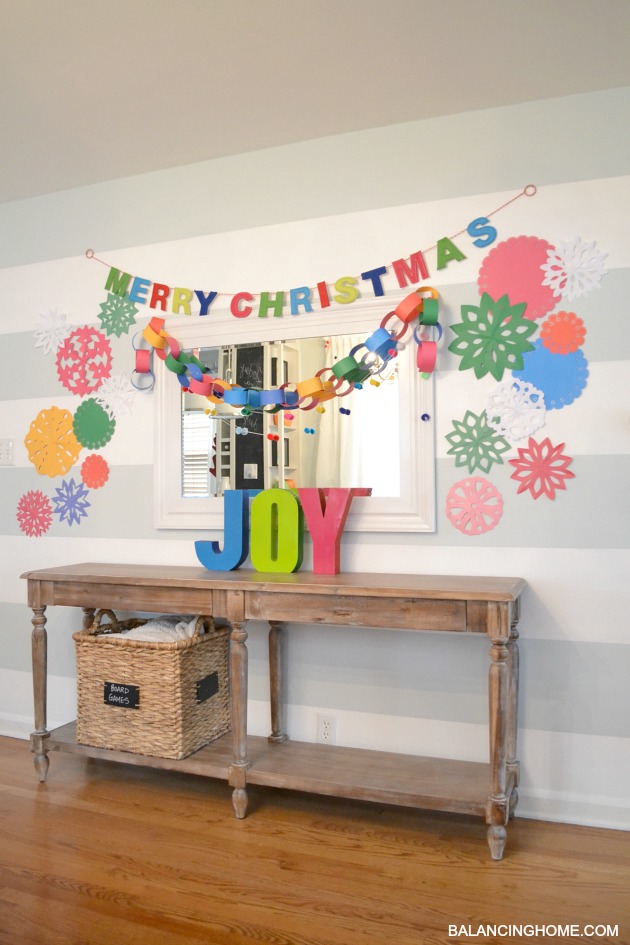 It was so dark here in Wisconsin today. I’m hoping for some sunshine tomorrow so I can get some more pictures and share more of our Holiday home. What kind of decorating did you do/will you be doing this year?