Our Christmas is crazy and chaotic, but I love it and wouldn’t have it any other way. As a kid, it was the best. I love that I have so much family and that we make time to see them all.

My little sister moved to Connecticut this year and after hours of face timing, the kids were pretty excited to see her in real life. Especially Quinn. We had a family night at my parent’s house Saturday night and we rocked a gingerbread house. Quinn really wanted to make one. At 29, this was my very first gingerbread house. 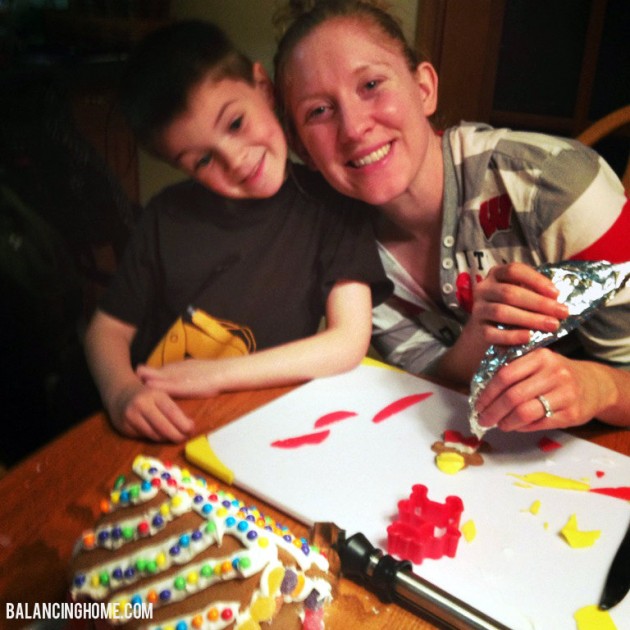 Sunday was Christmas with Ross’s family. There was this yummy veggie dish that I have to steal the recipe for. There were presents, of course. Ross and I were lucky enough to be gifted an iPad. WhatWhat! We also got the absolute coolest handmade gift ever from Ross’s sister. She made one for our family and her other brother’s family and her parents. This is so much cuter than the picture shows. I swear! Check out Ross with the new baby in a baby carrier. 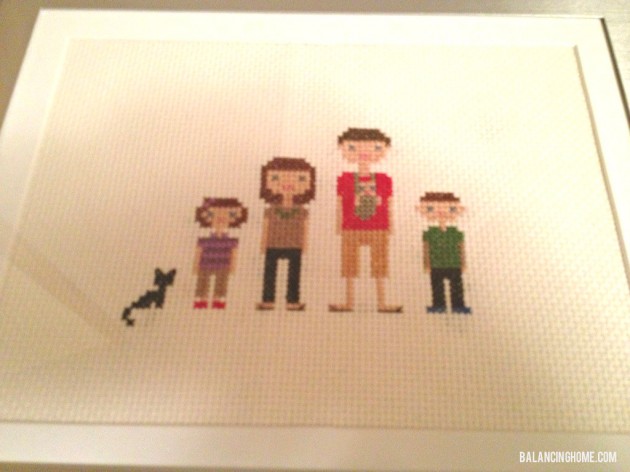 By the time we got home I was beat. I slid on my new slippers and dug into my chocolate covered pretzels. Don’t judge. Ross and I decided we would worry about the pile of presents sitting in our kitchen later and chilled out with a movie, The Bourne Legacy. I was slightly disappointed. I am a sucker for Matt Damon. If he is in a movie, I instantly want to see it. Anyone else? 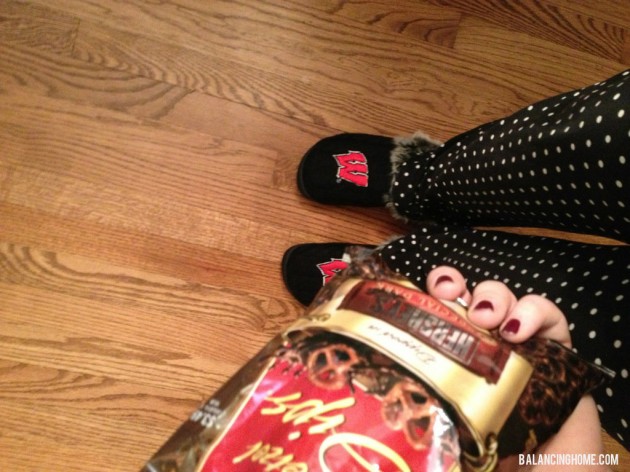 Monday was Christmas Eve and we had a lot left to get done before the big guy came. We let the kiddos open a present from us. Each kiddo got something and then we as a family got Brave, which we watched. We think a movie Christmas Eve day will be a tradition around here. 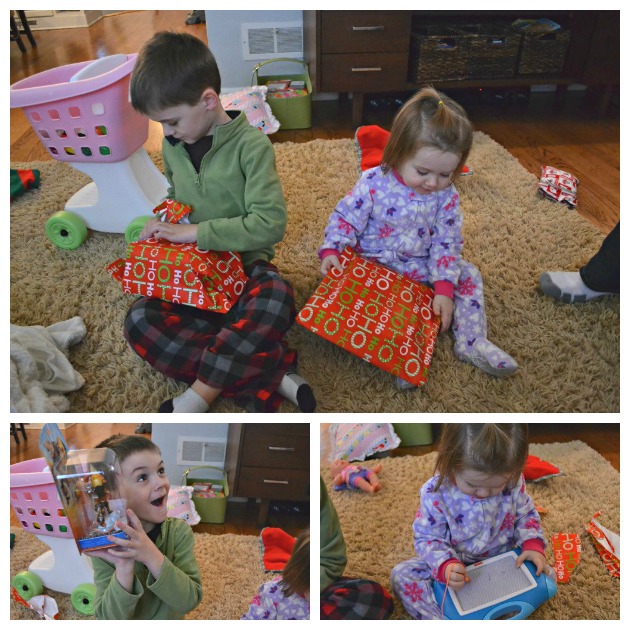 We did 4:30 mass. Unfortunately, in order to get a seat you have to get there kind of early. It gets long for the kiddos, but they were pretty good. 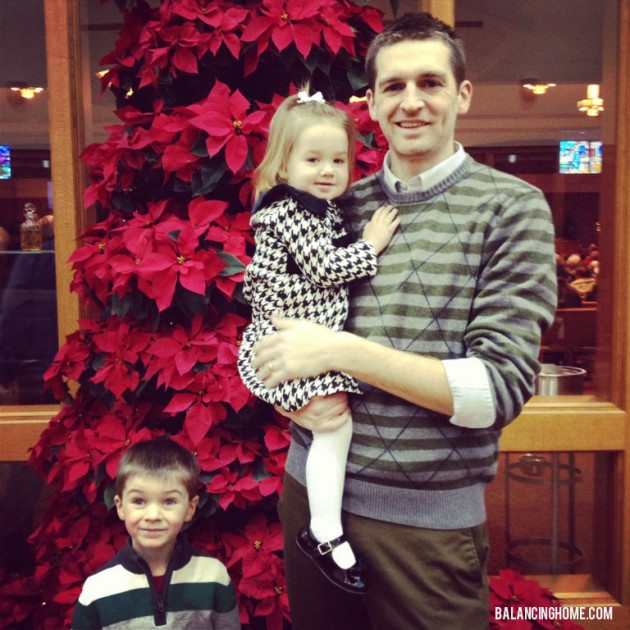 I attempted to take pictures of the kids in front of the tree. I really wanted a family picture, but setting up a tripod and timer was out of the question. I was barely able to capture anything useable. It was so cute how they tried to follow directions. 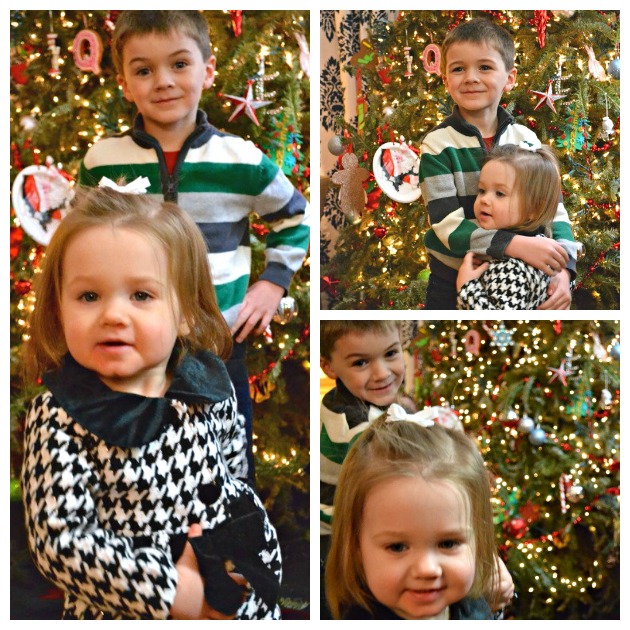 Then we got to baking. Santa needed cookies. This one had been on Quinn’s to-do list for sometime, but somehow it got put off to the last minute. I mean, Santa didn’t want stale cookies. 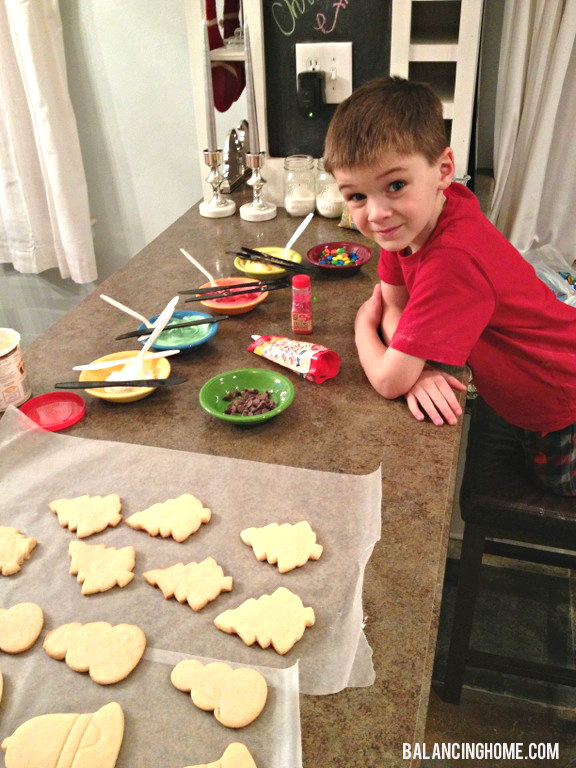 When we bake I just let Quinn do his thing. It isn’t about pretty cookies, it is about a pretty experience. After cookies Quinn put carrots on the back deck for Santa’s reindeer. 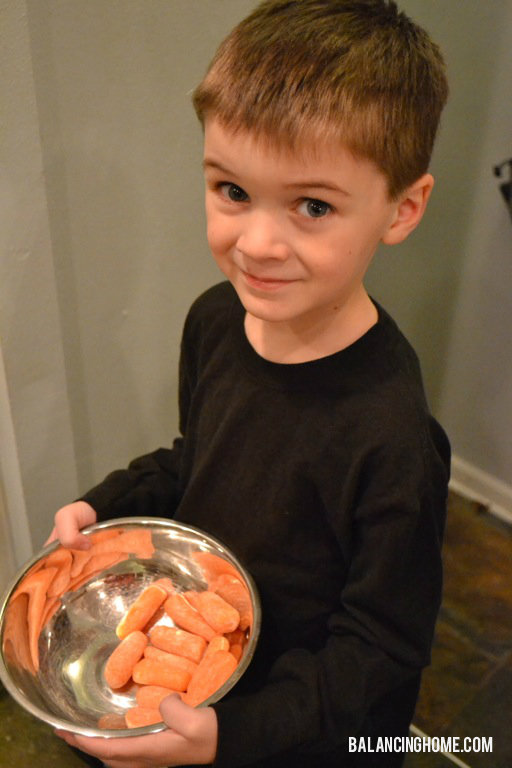 Santa’s reindeer ate them too! And they left chewed up carrots all over. Santa came! 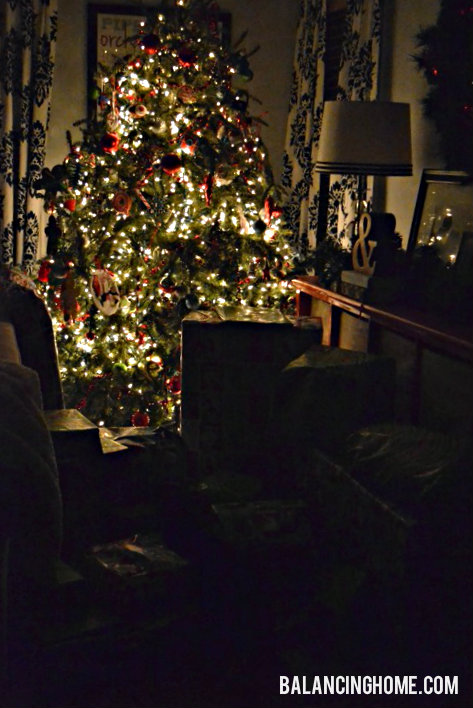 Then it was Christmas morning. Hard to believe it was already here. We had told Quinn to yell for us when he woke up and we would come get him. We knew he would see the tree on his way down to our room and we really wanted to witness his reaction. Being the rule follower he is, that is exactly what he did. I actually had a hard time sleeping, because I was so excited for the kiddos.

Quinn yelled, Ross got him, we gathered in our room for a moment while Ross and I found our glasses and made ourselves presentable and then we woke up Eleanor. We told the kiddos to sit tight in E’s room while we grabbed the camera. I grabbed the digital camera and Ross grabbed the video camera and then we called them out. Quinn came out. Did some sort of dance. 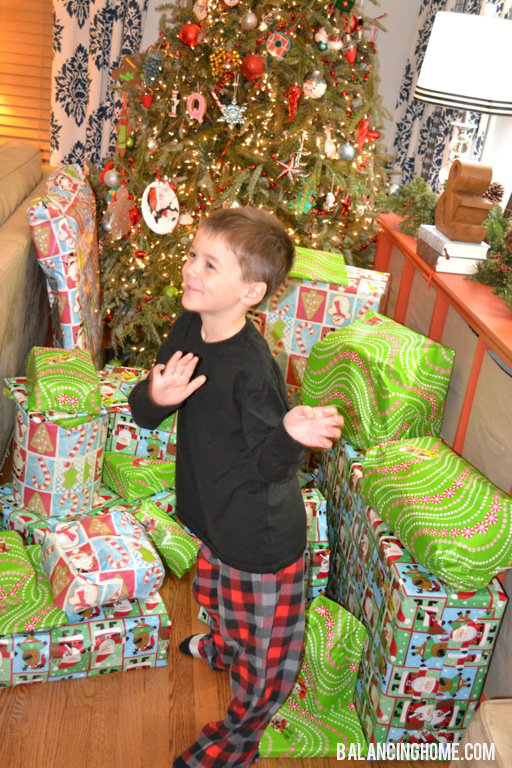 There was no sign of Eleanor. Yelled for her again and she finally comes out pushing her cart (Christmas present from Ross’s parents). 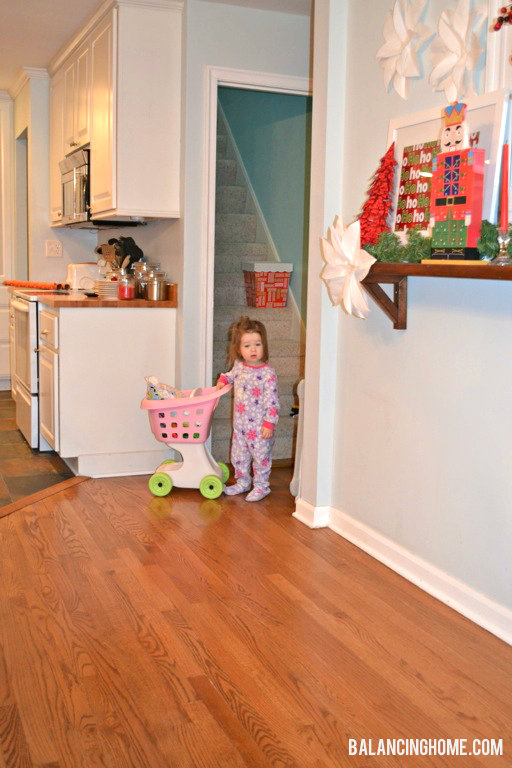 We did the whole opening presents gig. Eleanor liked playing with her presents, but didn’t care too much for opening them. Quinn absolutely loved everything about it and exclaimed, “I didn’t know Santa was going to bring me this much stuff!”. 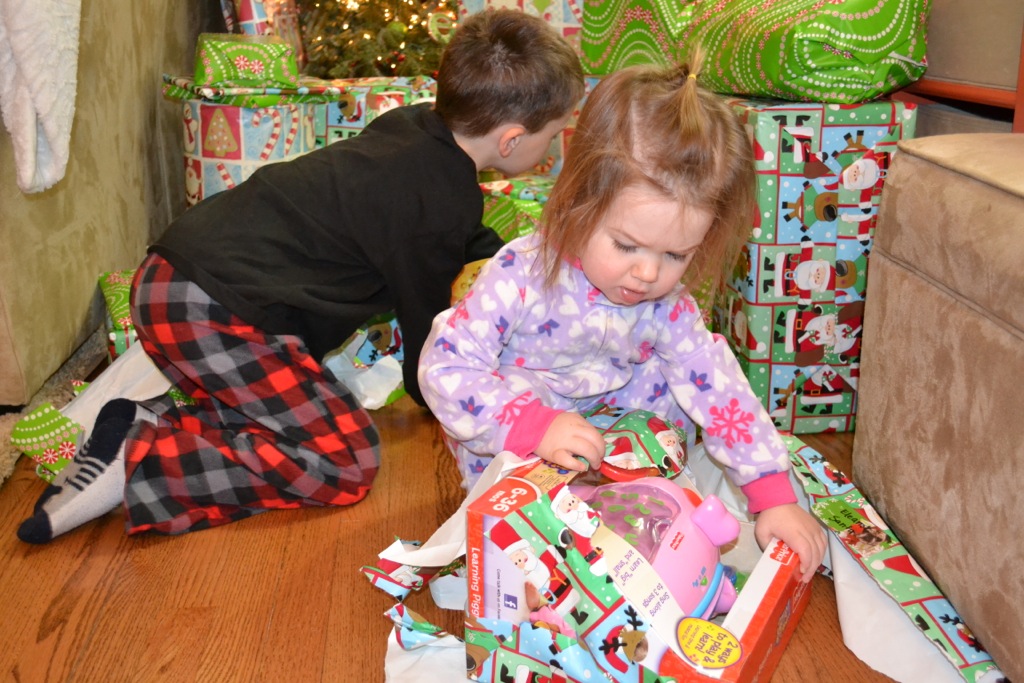 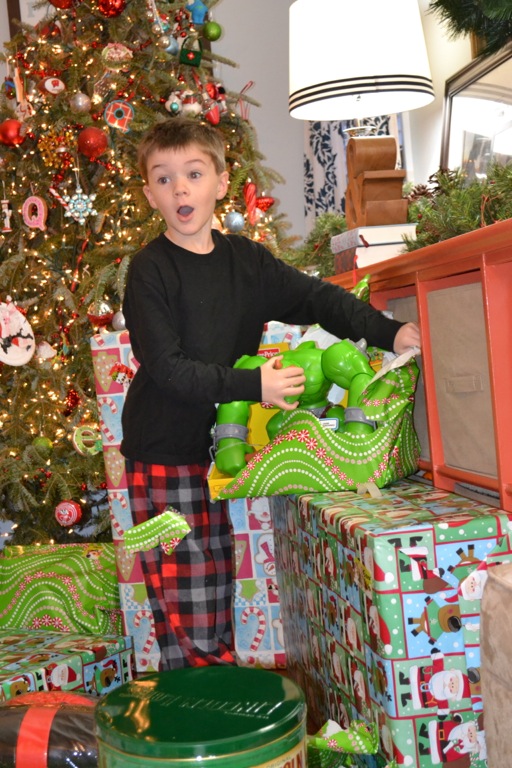 After all was said and done, it looked something like this. 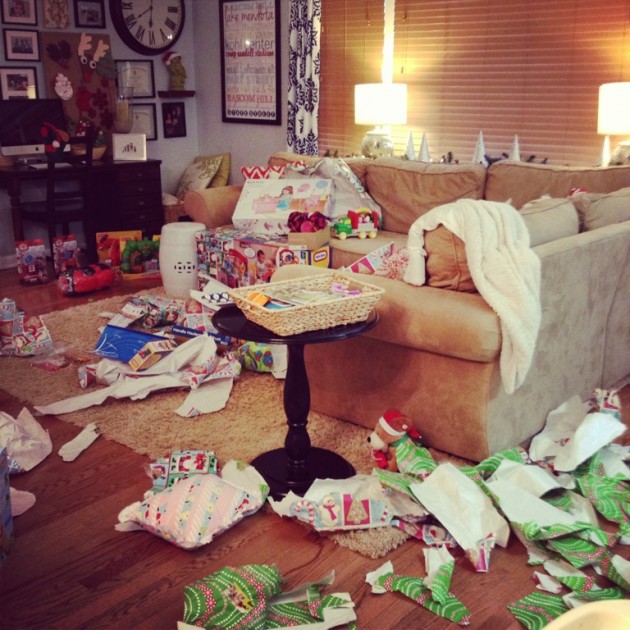 By 8:30 we were at my brother’s house. Luckily he lives a street over and two blocks down. We were still in our pajamas. My twin brother and his wife hosted breakfast. Yummy french toast, sausage and fruit. My parents, my little sister and her husband and my little brother were all there as well. This is kind of our gathering for our immediate family before chaos ensues. Check out my cutie pie spy! 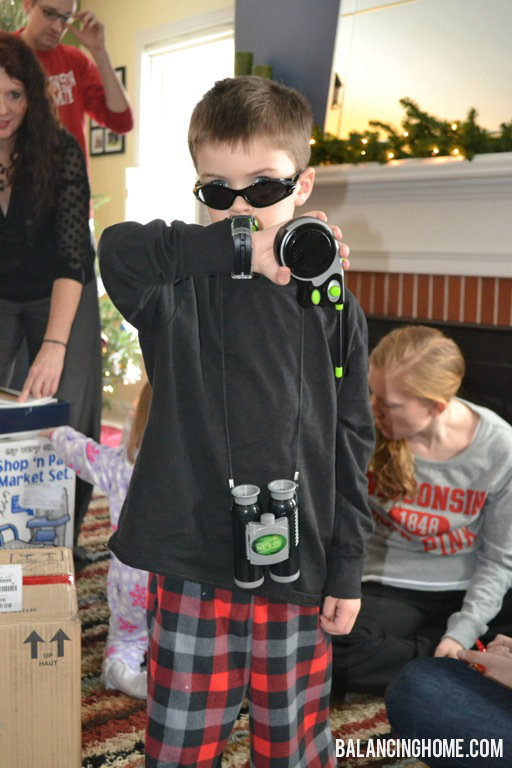 My brother’s wife is a Kindergarten teacher and her class has a pet turtle. The turtle was home over Christmas break. Eleanor is both obsessed and scared of it. She wants to see it, but she is unsure. 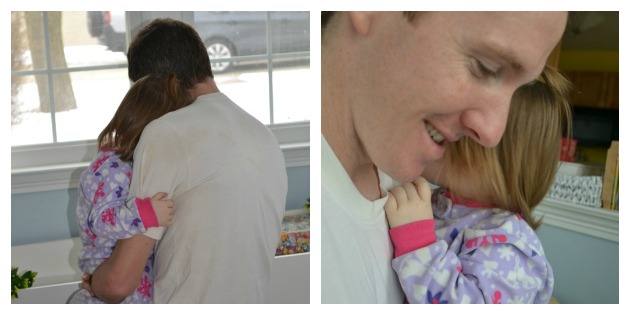 That is my brother showing Eleanor the turtle. Once again, more presents. Ross and I got a Keurig from my parents and we are kind of obsessed now. If you have one and found a k-cup flavor you love, SPILL! After breakfast and presents it was back home to shower and then off to our next Christmas event.

We do lunch and my grandparents on my dad’s side. We always play bingo. No, I didn’t win. My brother one twice. If you win, you win a scratch off lottery ticket and both of his tickets were winners too. Lucky guy. After my grandparents on my dad’s side we headed to my grandparent’s on my mom’s side. Eleanor fell asleep on the way (only a 10 minute drive) and stayed a sleep in Ross’s lap for a couple hours. Thank god, because she would have been a hot mess without the nap. My grandparents on my mom’s side is complete and wonderful chaos. They have 12 children. Their children, grandchildren, great grandchildren all add up to make some pretty impressive numbers. As a kid this was the best part of Christmas. I couldn’t wait to see my cousins and tell them what I got and spend all day playing.

Another holiday tradition we have is game night. It never really is planned, per say, but it always happens. We get new games for Christmas, everyone is off and home and it just seems like the right thing to do. This year we did a burrito dinner at my house for the family. My sister and her husband were the chefs. My cousin joined us later in the evening for game night as well. 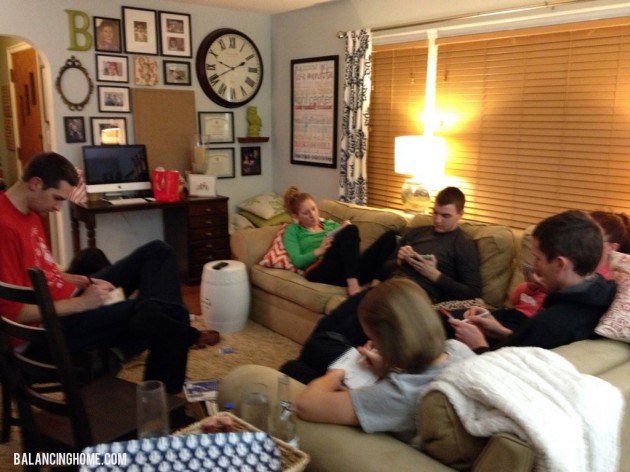 So yes, our holiday is full and chaotic and crazy, but I feel so blessed to have so much family to share the holidays with. I hope that you had a magical, family-filled, Christmas as well.